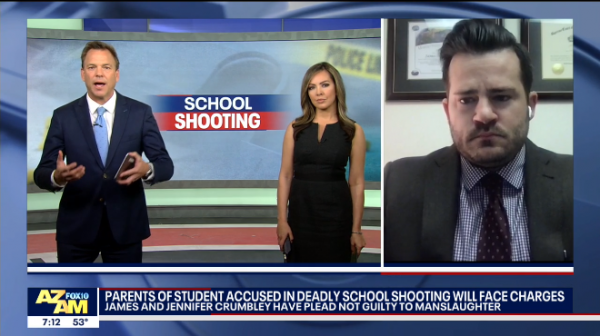 By now, you’re probably familiar with the case of Ethan Crumbley, the alleged Michigan school shooter, and the unprecedented charges against his parents, James and Jennifer. While Ethan faces charges of murder and terrorism, James and Jennifer have both been charged with involuntary manslaughter. While this will obviously have a ripple effect for any and all school shooting cases from here on out, what this situation would look like in Arizona would be somewhat different.

For starters, Arizona doesn’t have an “involuntary manslaughter” charge. The charge in an Arizona case would fall into 1 of 2 categories: manslaughter or negligent homicide. Manslaughter is defined in Arizona as any unlawful killing that occurs without malice or the intent to kill. An example here would be a death resulting from children playing with a loaded gun. The key operating mechanic of this charge is that the action was a gross deviation from a standard of conduct: in the example, allowing children to play with a gun at all is generally deemed incredibly unsafe. Manslaughter in Arizona is a Class 2 Felony and carries a sentence of 3 to 12.5 years.

Negligent homicide, on the other hand, is when a person acts in an unreasonable or unsuitable manner and said action results in a death. For example, a parent leaving a child in a hot car. The key operating mechanic of this charge is gross deviation from a standard of care: leaving a child unattended is never permissible, but especially egregious when extreme temperature is involved. Negligent homicide is a Class 4 felony and carries a sentence of 1 to 3.75 years. If the case in Michigan were to occur in Arizona, which of these would be in play? Well, it would depend on the specifics of the case. In the case of Ethan Crumbley, there are multiple factors in play regarding his mental health, the parents’ awareness of said mental health, and the parents’ responsibility to their child regarding proper care for this mental health. How the prosecution would approach these charges in Arizona would rely on the following question: did the parents knowingly commit a reckless act in allowing their child direct access to a gun, or was the child’s ability to access the gun indirectly a result of their failure to properly store the weapon?

While holding parents accountable for the actions of their children is nothing new both socially and legally, we’re entering a new phase of law that looks to cut down on school shootings while also keeping the Second Amendment intact. If parents can be held responsible for those killed or injured by their children, what are the long term ramifications in situations where low-income, working-class parents find themselves charged for the actions of their children? Working class parents can’t always be at home to make sure that their children are out of trouble, but should that truly be their legal burden to bear? The results of the Crumbley case may tell us one way or the other.

If you missed my appearance on FOX 10 this morning, here’s a link to the video where I discuss what I’ve covered here in an interview format.

If you find yourself in a situation where you need an experienced defense attorney for any crime, from DUI to negligent homicide, I am ready and willing to take your call and take your case.

GET A FREE CONSULTATION
Posted in James Palestini, Media and tagged Lawyer