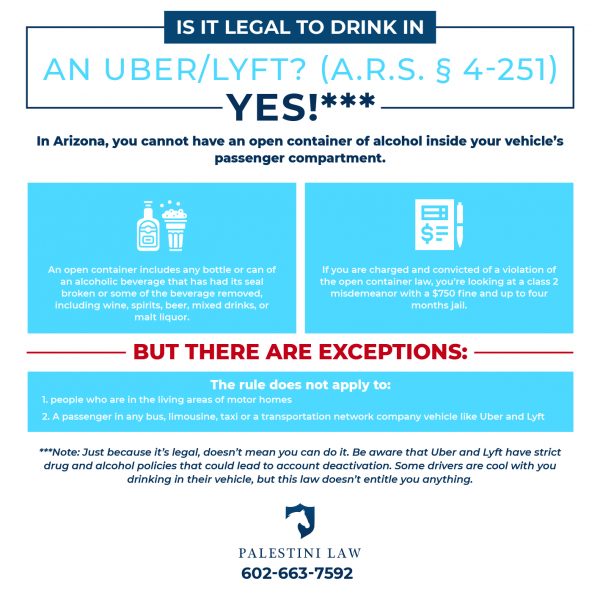 With gas prices going up and no end in sight, you probably wish you could use someone else’s car to get from place to place. Thanks to companies like Uber and Lyft, that’s actually… not a bad idea. We’ve talked about it before in DUI articles, but using a rideshare company to get you from Point A to Point B is always a good idea when you’ve been partying. But what if you want the ride to be a party, too? Is it legal to get the party started in your Uber?

If you weren’t already aware, it’s illegal to have an open container in a vehicle, even if the container belongs to the passenger. The restrictions for this are very clear: there can be no alcoholic beverages of any kind in a vehicle with a broken seal. That’s right, you can’t transport that half-empty bottle of Fireball from your last frat party to your latest pregame without risking a ticket. An open container violation in Arizona is a Class 2 misdemeanor, which carries a penalty of a $750 fine or up to 4 months in jail.

The second exception allows for open containers in any chartered bus, limousine, taxi cab, or rideshare vehicle. That’s right: you technically can get the party started in the Uber! However, just because it’s legal doesn’t mean there aren’t rules. Uber and Lyft are companies with their own policies, meaning that while you can’t necessarily get in legal trouble for drinking in an Uber or Lyft, you can face consequences such as the loss of your account, or possible charges stemming from refusal to cooperate with the driver’s instructions. Remember, just because you hired the driver doesn’t mean you bought the car - it’s still their property, and you can still be trespassing. Some drivers don’t have an issue with you drinking in the car, so you’re best off asking ahead of time!

If you find yourself accused of taking carpool karaoke a little too far, remember to contact us here at Palestini Law. We’re well versed in all situations DUI and DUI-adjacent, and we’d be happy to help get your show back on the road, but maybe a little more legally next time.

GET A FREE CONSULTATION
Posted in DUI Law and tagged Lawyer